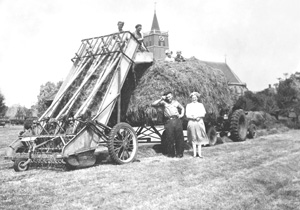 In the fifties, farmers in increasing numbers discovered the benefits of dehydrated grass. Grass meal contains carotene and healthy natural ingredients and became known as the green medicine.

In addition to dehydrated grass, Jan Hartog was also a trader in dry cattle feed products. He regularly bought damaged goods in the Rotterdam harbour. In the sixties he began to import American alfalfa pellets. This dehydrated feed made of sun-dried lucerne flour flooded the European market. In the second half of the 1960s his dehydration facility grew and became increasingly modernised. His two sons – Wil and Piet – started to work there as well. Nowadays they are the managers of the facility.

By the seventies the dehydration facility had become a cause of nuisance and could no longer be operated in the village. After several managerial hurdles and a threat of a building freeze were overcome, construction of a new site began in 1974. In 1975 Hartog became the proprietor of the largest drier in the world, with a capacity of evaporating 20,000 litres of water per hour. The oil crisis meant a serious setback for the new dehydration facility. No one could predict the fast rise of oil prices, which increased from 5 cents to 45 cents per m³ within seven years. Also the exceptionally dry years of 1975 and 1976, which meant less interest in dehydrated grass, spelled a number of difficult years for Hartog. In 1977 Wil Hartog won the TT of Assen. More information about Wil Hartog and the TT of Assen is on wikipedia.

In the eighties the dehydration facility developed into a flourishing business. The Straw Bale Structure became a great success. Hartog expanded exports to Kuwait, The Arab Emirates and to various European countries. Dutch farmers began to show interest as well. The milk prices were favourable and the cattle farmers wanted the best for their herds. A great deal of money was invested in developing machines, in expanding and modernization. The result was that in 1987 a 40-ton installation replaced the 20-ton one from 1975. The reason that Hartog invested in this new dehydration installation is that the demand for dehydrated lucerne continued to grow.

Growth continued and in 1991, in addition to the 40-ton dryer, a brand-new second dryer with a 50-ton drum began to operate. With this drum Hartog once again had the largest drying drum of soilage in the world. The peak year of the dehydration plant was 1993 with an annual production of 55,000 tons of dehydrated product. By developing horse feed, the plant added a new line, which has since demonstrated signs of growth only. 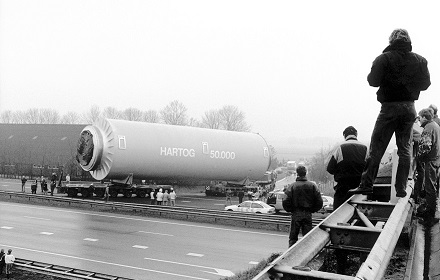 A good example of this is the Lucerne-mix that we introduced in 1991. This product, which is unique on the Dutch market, became so successful that it spawned the equine management branch at Grasdrogerij Hartog. Over the years, the selection has been expanded to include various concentrated feeds in order to offer a complete package.

In 2007, we started a new production line manufacturing handy 20 kg bales of roughage for horses called “Compact Grass” and thus further expanded our selection of roughage. The demand for high quality roughage for horses continues to grow, as the advantages become more and more well known. The success of the Compact Grass line has inspired us to start a second production line in 2013, Compact Lucerne which will allow us to better meet the demand for roughage both at home and abroad.

Sales of Hartog feed continue to grow. At the present time Hartog supplies feed for cattle, horses, poultry, goats, ostriches and camels. The major markets for Hartog are Europe, Africa and the Middle East.